Your Canadian source for all things motorcycle!

See ALL News, archives, and categories

The special Dunlop Qualifying tires will be recognizable to fans by their sidewalls decorated with a broad yellow stripe. 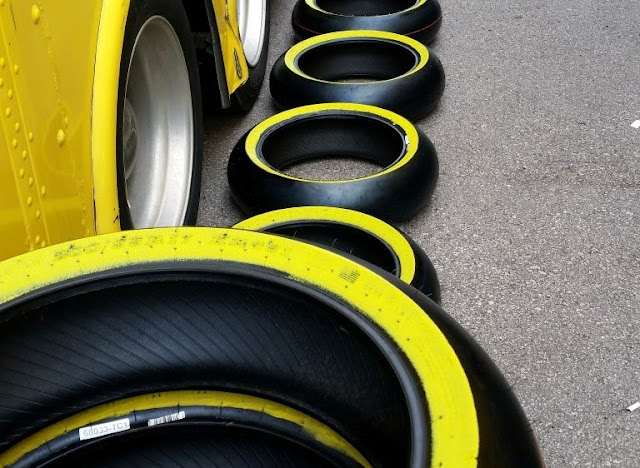 “It’s been five years since we last used Q tires in the Series,” explained CSBK Series Technical Boss Fred Benjamin. “We have slightly tweaked the August 19schedule to make it easier for the top Pros to get set for the final 15-minute SuperPole session. In the second session for Dalton Timmis Insurance Pole, our top guns will have an added advantage around CTMP.”

At 2016 CSBK rounds, the Dalton Timmis Insurance SuperPole session establishes the top 10 positions on the starting grid for Saturday and Sunday’s Feature races, as well as awarding $2,000 in prize money to the top five and a Rockwell watch to the winner of DTI Pole Position.

Qualifying and each Pro Superbike race are covered in a 30-minute segment, broadcast on TSN.

“There is certainly an art, or a skill set, to getting the most out of a Qualifying tire,” explained Sandy Noce, owner of Dunlop Canadian National race tire distributor Pro 6. “You only get one or two laps at the most that provide the best from that ‘Q’ tire, but those laps could be as much as a second faster than what a good rider can achieve with a regular race tire.”

The special Dunlop slick ‘Q’ tire will be released to the top 10 riders after the opening portion of Dalton Timmis Insurance SuperPole, giving those racers sufficient time to place the new tire in warmers and adjust their motorcycle as they see fit for the increased traction.
“The Qualifying tire is not a race tire, and does not substitute for a race choice in our Dunlop slick line-up,” continued former Pro racer Noce. “This is something special, celebrating our third season as spec tire with the CSBK tour, and offering our best competitors the chance to add an extra dimension to their Qualifying efforts.”

In 2015, pole position for the Pro Superbike races at CTMP was taken by the Hindle Yamaha YZF-R1 of Alex Welsh of Uxbridge, Ont. Welsh turned a best ‘Q’ lap of 1:21.852 around the 4.03km-long, 10-turn, formerly-known-as-Mosport venue.

In the 2015 races, double winner Jordan Szoke of Lynden, Ont. set the fastest race time with his 2015 title-winning Express Lanes/Motovan BMW S1000RR. In Sunday’s second Pro Superbike round of the CTMP event, Szoke turned a fastest lap at 1:21.677 on his way to a perfect, seven-victory season.
Comments